a couple thoughts about the hometown hero... 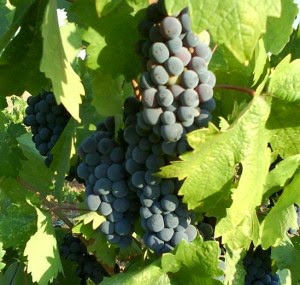 Zinfandel is the great American success story. It is a versatile performer capable of wearing many masks, of playing many roles in the drama of modern wine—or is it a comedy? Jury is still out...

my favorite Zinfandel moments include a dinner with a noted (very, and for that reason anonymous in this instance) American importer of fine wines from France and elsewhere in the Old World. Among other foolishness, I had concealed a bottle of 1973 Ridge Geyserville in a paper bag, and soon had the fellow swirling the wine in his glass and trying his damndest to guess which château in Pauillac the wine had come from. Oh dear…

Ridge will figure prominently in any story about Zinfandel—nearly twenty years ago I had invited a couple topnotch German winegrowers from the Pfalz to dine with me in Los Angeles at my favorite haunt, and spared no resource in digging out some extraordinarily good California wines for them to enjoy—very fine examples: 1978 Chateau Montelena Cabernet Sauvignon, 1978 Diamond Creek Volcanic Hill Cabernet Sauvignon—but the one wine that took the cake, not to mention making the braised lamb-shank bleat out of sheer ecstasy was the 1970 Jimsomare Zinfandel from Ridge. Still a baby at twenty-five years of age, a subsequent bottle ten years later was approaching perfection.

and lest one infer that I'm just reciting ancient history, not too long ago I had taken a group of colleagues and customers on my Different Germany tour, which ended up in Siebeldingen in the Pfalz, where we came to roost in the Hotel Sonnenhof, and had a wonderful dinner in their restaurant. Top wine of the night? 1994 Ridge Geyserville — which during its rather fast half-life in decanter and glasses managed to hover weightlessly—not a bad trick at 14.3° alcohol—between Bordeaux and the Veneto. And had cost the princely sum of  24€ on the Sonnenhof's wine list.

and we want to get to know this versatile fellow just a little better. Every few years a new theory has been hatched concerning the origin of Zinfandel, and its relationship (very close) to the Italian variety Primitivo along with is relationship (close) to the Plavac Mali from Croatia. But now the mystery has been solved once and for all, by Californian vine-geneticist Carole Merideth, who has identified the original Zinfandel—Tribidrag—in an obscure vineyard on the Dalmatian coast of Croatia, where it is known as Crljenak Kastelanski. And what's more, there are historical records of the Tribidrag being traded —and mentioned by name—across the Adriatic Sea to Venice in the early 1400s. One excellent appreciation of the variety was published by David Darlington in 1991; his Angels' Visits remained one of my favorite wine-books for quite some time. Darlington places Zinfandel's initial American appearance made in the1820s, brought over from the Imperial collection in Vienna, Austria. In the 1830s it was offered for sale by a Boston nursery, and became a popular table grape—grown under glass—in New England. In the 1850s Zinfandel was introduced to California, where it became a mainstay of the burgeoning viticulture that developed after the gold rush, and was widely planted during the wine-boom of the 1880s.

i am in the minority among serious wine professionals in not blanketly condemning the phenomenon of White Zinfandel, that wine tailored to the American consumer who’d grown up drinking Kool-Aid (not the metaphorical, but the original) and had a taste for that sort of sweetness. I actually served a bottle once along with Mulligitawny, and it was fine. And it introduced consumers to wine that otherwise would not have dared a step in that direction. But more importantly, it kept some really good old-vines vineyards from either getting hacked-out or budded-over during the 1990s.

zinfandel is rather disease-resistant in the vineyard; it produces generous bunches of grapes, but these will quite have unripe, ripe and over-ripe grapes hanging together. Once in the bottle he holds his liquor rather well. Common characteristics of aroma and flavor include spice-notes; the clove, cinnamon, black pepper and mint. Fruits belong to the dark-berry variety, black currant and black raspberry, black cherry. One notable Zinfandel that has always appealed to me is the gentler style practiced by Doug Nalle, who told me he always tried to get his Zin into the house at or under 24° brix, which meant into the bottle right around fourteen percent alcohol. This is a variety that works and plays well with others. Ridge’s wines can either be primarily zinfandel, like their Lytton Springs, or a field-blend like Geyserville that actually doesn’t have enough Zinf on the lot to wear the name by law—although it certainly wears the heart on its sleeve. Favorite playmates include Carignane, Alicante Bouschet and Petite Sirah.

Joel Peterson and Ravenswood hardly need any introduction, but another estate I greatly admire is Green and Red. Propreitor Jay Heminway was a maverick, who planted Zinfandel on Howell Mountain at a time where anybody with any sense was planting CS & M. His wines buck the general trend toward bubblegumminess in Napa Zinfandel, and manage to show plenty of balance at north of 15% alcohol.

my personal favorite locale for this variety is Sonoma’s Dry Creek Valley. And that means growers like Rafanelli, Quivira, Ridge Lytton and Unti, along with urban pioneers Dashe, who make wines from the ancient vines in Louvau Vineyard and Toll Brothers Ranch. Dry Creek was already overgrown with Zinfandel well before the end of the 19th century, although the growers suffered one significant setback with the pandemic of phylloxera in the early 20th century—which found Zin being replanted on the resistant St George rootstock—and then another with the unmitigated disaster of Prohibition. Fortunately many of these old vineyards survived the 18th Amendment to the US Constitution, and still form a significant part of the 2400 acres of Zinfandel in the AVA.

of course it is important to acknowledge Sonoma Valley's Stellwagen and Old Hill vineyards as well... And then there’s Amador & Shenandoah. Mountain wine. Thicker skins and stewed fruit notes, offering great depth of flavor and sometimes a little heat going down the dolce vita… Lodi, Paso Robles, Contra Costa County—all of these are good Zin territory.

one excellent tribute to Zinfandel was paid on the public wine forum Wine Berserkers recently, where the members took great pains to compile a list of the venerable sites in the Golden State where Zinfandel is grown. The URL is: http://www.wineberserkers.com/forum/viewtopic.php?f=1&t=18190&hilit=california+old+zinfandel+vineyards

zinfandel is currently enjoying a resurgence on the NYC gastro-scene. Food matching with the variety is eminently rewarding; there are few directions in which this versatile fellow fears to tread, and most of those are better fed with—any culinary manifestations Italianate heritage, most red meat dishes—and lighter Zins will do as nicely as Chianti with seared salmon. Zinfandel likes cheeses like Reggiano, Mimolette and Roomano from Holland; some of the bigger ones will even take on Gorgonzola rather handily.
Posted by james oliver wright at 8:22 AM