...and now a word from the man behind the Moric: Wine and Culture 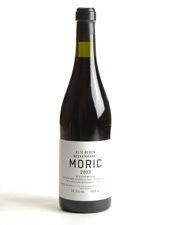 —friend and colleague Roland Velich sent me this piece he'd written for Cultivino in Switzerland couple of weeks ago, about some of the Factors Underlying.
I got to liking it; have been always disposed to take a look at the cultural elements that frequently lurk behind the bottle—and before too long had cobbled together an English version...
There can be no doubt at this juncture that the world has another great red wine grape-variety, finding its way into the bottle.

It has been said that wine is one of the oldest elements of human culture. And so we ask ourselves how, then, did wine evolve into a cultural asset? The initial glance would suggest perhaps the fact that human intervention sought to achieve regular harvests out of a plant growing wild, in that the wild plant was cultivated and domesticated. People became settled and less nomadic, and thanks to an expanded dietary basis could spend the winter in secure quarters, where they were able to thrive and multiply—a well known and time-honoured story. And along with this, wine became a spiritual companion to the most widely different and various cultures.

The Foundation—
Ödenburg, known today as Sopron, was famous for its wine, the Ödenburger Blaufränkisch, which grew on the hillsides along Lake Neusiedl on the eastern outskirts of the city, as well as on the northern and southern foothills of the Ödenburg Mountains. A wine that had achieved great popularity, and as far as we know was successfully exported all over the world. Founder and sustainer, financier and daily bread for generations in Ödenburg and environs. Many aspects of the wealth and beauty of this city and neighbouring localities can still be seen today. Our wine is now grown on these last hillsides of the eastern Alps—geologically speaking, foothills of the Alps, covered with sediments left long ago by the Pannonian Sea. The climate here is continental, influenced by the Pannonian Plain. Our wine is grown at the intersection of the two great and dominant formations of the middle-European landscape, the Alps and the Pannonian Plain.
Conclusio I:
Bacchus amat colles. And it is not only Bacchus who loves the hillsides—Blaufränkisch loves them as well, along with other particular geologic, climatic and social circumstances conducive to achieving extraordinary quality.

The Undergrowth—
Blaufränkisch, a wine that achieved its first flight of fame at the time of the Napoleonic wars, and according to legend, was praised by the First Consul himself as one of the best red wines in all of Europe. The fine red wine was considered a valuable payment and exchange medium, equivalent to the hardest Napoleonic French currency, the franc—also a blue note. Is this where the name originated? Or is that just another good story? Others say that Charlemagne—personally, even—introduced the Blaufränkisch to the country. And of course, Empress Sissi of Austria, Franz Liszt, Johann Wolfgang von Goethe, the Iron Chancellor Bismarck—and so forth and so on—were allegedly great fans of the Blaufränkisch. Many stories, great names from the cultural world, but very little hard fact. Told in order to provide the wine with a cultural context and to solidify its value? More likely to make the good stuff taste even better to potential customers—shall we say, as an early PR gimmick...
Conclusio II:
Marketing, a technique long present in our culture, which doesn't really help us much in our presentation and findings. We've got to find things out ourselves.

Interruption—
Burgenland, a narrow stretch of land to the south of Vienna, bordered on the north by Slovakia, in the south by Slovenia, and at its longest border to the east by Hungary. Once known as German West Hungary within the Austro-Hungarian Empire, as an integrated constituent part of the Kingdom of Hungary—and this Hungary once one of the worlds greatest wine-producers. In 1921 Burgenland became part of Austria, seen as a source of supply for the city of Vienna. But the dictates of the victors in the First World War made a point of leaving all the cities of the former Deutsch Westungarn behind in Hungary: Steinamanger, Pressburg (now Bratislava in Slovakia) and Guens, as well as Ödenburg, the naturally-evolved centre-point of the region. Central point as well of a prospering wine-culture, with Blaufränkisch and Furmint as its most important grape varieties. Burgenland remained, but as a land without cities, and worst of all as a land without a capital to hold it together, bereft of its centuries-old historical context. The land of the Ödenburger Blaufränkisch was cut to pieces, and with this the history of the grape variety became lost in the dark labyrinth of Hungary's political confusions.
Conclusio III:
Politics as a great destroyer of cultural assets and traditional values.

Warmth—
Two wars and the barbed-wire they left behind in their wake, running across a once-unified region, the breaking-off of essential rural territory on the one side and the centre-point on the other, meant a great loss for all concerned. Loss of establishment, loss of identity, loss of self-confidence as well as confidence in the splendid circumstances the region had previously enjoyed. The result often expressed itself in terms of indifferent wines designed according to belief in the quality of other styles and belief in the omnipotence of homogenised taste— industrialised wines bereft of any soul, arisen out of the merciless categorical imperative of a Five Year Plan. The consciousness of a common history concerning a product that we share, a product rooted in its own strength and peerless character, as well as the sense of security that comes from being rooted in a common cultural identity, will demonstrate to us that it's not always the shirt that's closer to us than the jacket. On the contrary, 'tis the jacket keeps us warm in stormy weather. A grape variety like the Blaufränkisch would certainly have the ability to spread wonderful warmth out over the borders.
Conclusio IV:
Self-reflection as a spur to cultural development.

Culture—
Cultural achievement consists of the collection, amplification and implementation of techniques whereby with the passage of time a crude block is fashioned into an artistically expressive object capable of arousing emotions:
Natural circumstances of climate and soil, the directional orientation and incline-factor of hillsides; trial & error and the lessons learned. Recognising mistakes in previous interpretations of empirical data and correcting them, the choice of rootstock, the grape variety and which clone—the selection of seedlings and the research concerning where they might be planted to obtain the best result—vine-training techniques, plantation density, cultivation of the soil according to conditions, knowledge about the physiology of the vine and applying this to their cultivation—optimisation of harvest time according to style, and above all the most effective interpretation of the grape and its location... Picking (Lesen—the German verb means to read as well as to pick grapes) the individual vintages and accepting the characteristics and peculiarities that render each unique. Triage during harvest, instinct, influence of the soil upon flavour, destemming, maceration, active intervention or simple TLC (?), patience, risk, willingness, sleeplessness, maturing, casks, tasting, despair, enthusiasm, bottling-appointments, bottling. And all this every year all over again, each facet a new experience every time, which can exert its influence on the subsequent vintage. And finally we paste our label on the bottle!
Conclusio V:
The span of time from when first the semi-nomadic horseman discovered a flavourful berry in the forest—with which he filled his saddlebags and then after a week's journey home found something in the saddlebags that perhaps didn't taste as good, but had something inspiring about it—until today. Wine as a secularised object of desire and big business—but still great fascination as well—has developed its cultural history into a double helix with the deeply interwoven strands Humanity and Wine.

Roland Velich, born in  1963, comes from Apetlon on Lake Neusiedl in Burgenland. Together with his younger brother Heinz he led the family estate Weingut Velich to the top rank of Austrian viticulture, creating among others the white cult-wine Tiglat. In 2001, Velich embarked upon his visionary Blaufränkisch project MORIC, where he interpreted (within the context of Burgenland) a previously unknown, delicate and subtle style of wine made from old-vines parcels. Roland is one of the few individuals most keenly responsible for today's worldwide success and recognition of Burgenländer Blaufränkisch.

Posted by james oliver wright at 6:48 AM