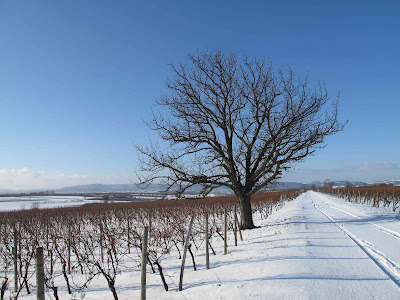 that’s the start of a famous poem by Dylan Thomas, but having been myself at one point a windy boy, I am reminded in reading this of a time in my career when I set about to learn all that I might about matters of interest spread out far and wide—

which led the spread of course to include food and wine.

I remember the first time I made a terrific mess of a match. I was just learning my way around the vineyards of France, and learning the intricate routes and branches of my own gradschool kitchen.

one night I had favorite nonhorizontal girlfriend Jane-Emily over for dinner in my digs in Boston. I had recently learned about ginger, which to this day is one of the signature elements that sails forth from my wok or sauté pan (often with a bit of garlic on its breath)...

and I was learning about what goes with ginger; one of these things is honey. And I hadn’t become as shy of commercial chicken at that point as I am now, so was quite pleased to concoct a concoction of chicken breasts with ginger and limejuice and honey, and not much else except rice and lima beans, steamed both.

I had also just discovered Sauvignon Blanc. And along with this came the realization that the best SBs come from lands laid out along a little lazy waterway called the Loire... in a far-off winegrowing region, name of France.

alongside the dish that would coldbloodedly murder it.

imagine the smoky and tart, bracing character of the sauvignon being turned to bitter and angry—the ginger was not at fault, but rather the bee-product and the lime. Ouch! One too sweet, the other too tart... caught in the pincers’s grippington...

My dinner guest was gracious and patient with me; the friendship survived, and I am proud to say that I have never had such a hazardously wasted wine experience since then—although my career of trial and error still involves much error.

but... here are a few fine matches, from the wine lists and menus of some of NYC's most distinctive restaurants:

I've been going here since shortly after they opened, returning to the scene of several crimes, frinstance the place where I first had really fine Grüner Veltliner in the USA—Nigl Kremser Freiheit paired with crab and uni... But at the moment we're deep into the winter tasting menu, and nothing presents so signature a pairing as Blaufränkisch with their Roasted Loin of Venison served with Chestnuts, Beets and Pear. Wine director Juliette Pope has cut a good swath through our supply of the Moric Blaufränkish Reserve 2007. Just a little off-center for Moric; grower Roland Velich had to add a few barrels to his cellar on this occasion, so there's an atypical hint of new wood along with the black cherry and redcurrant fruit-tones. A classical case of deer in the highlights.

The thing I love best about Craft is that many of the dishes seem so simple that you could almost do it at home... But of course you can't; the actual preparations are deeply involved. My favorite is the Short Ribs of Beef with Root Vegetables, and the typical sides I typically order are Polenta and the Brussels Sprouts (cooked Bavarian style with bacon). Goodness knows what time those short ribs had to get up in the morning to make their date with the pressure-cooker... Running matured Barbaresco a close race for “nothing better” alongside this textural extravaganza is the St Laurent Zagersdorf 2007 from Rosi Schuster. This is like pinot noir's kinky cousin tuned up to an exhilarating level, the limestony soils accenting earthy underpinnings to the wild cherry and cassis tones of the wine, kicks the beef in the ribs and makes the flavors giddyup and go...

...oh my favorite by far among the fare is Wolfgang's Pochiertes Ei, a magickal marriage of maitake mushrooms, lobster, the poached egg in the title and last week's pumpernickel bread. With one tender and slender strand of cilantro, which arrives at different points of the proceeding on each separate occasion... One of the most demanding dishes to match, however—I’ve had it shrug off white Burgundies, and remain indifferent to Grüner Veltliner, and even turn its back on Riesling Sekt. The answer? Pinot Noir! And that's maybe because of the mushrooms... I've had a Bourgogne Passetoutgrains do quite well, and my friend Lingenfelder’s most excellent Ganymed, a Spätburgunder from the Pfalz, is fine, but the wine that takes the prize is the Stift Goettweig Messwein Pinot Noir Rosé 2009; long on pinot and pure pleasure, short on tannin, just manages to add a spot of refreshment that the darker pinots don't master.

Owner/Chef/Wine Director Ralf Kuettel has successfully synthesized Modern American with his Swiss roots—and one of the things that the Europeans do quite well is steak tartare. Ralf’s comes as an appetizer with toasts—although I tend to order it as a lunchtime entree hold the toasts, with a big bowl of fries. And what do I drink with it? It's a very traditional style, generous with the Worcestershire sauce, and I learned long ago from an unknown sommelier in a foreign language (it was in a brasserie in Orléans, actually, not in the wine country, and he made me drink a pinot gris from Alsace) that one drinks a white wine with tartare. Why? because it's not the meat, it's the lotion... the flavors of the condiments, aforementioned English sauce plus mustard and shallots and capers and Wachtelei, will do violence to most any red wine. And there's nothing that goes along with such a riot of spicy stuff as Grüner Veltliner does. Joseph Högl Ried Schön Federspiel has held pride of place as the choice for quite some time now. Just turning the corner between the apricot orchard and the pineapple patch, Schön means beautiful and the wine knows it.

And across the avenue from Trestle, there is a bastion of American comfort food, raised to an exalted level—Jimmy Bradley’s Red Cat. One need go no further than my favorite nibble to become acquainted with the level of imagination at work here: tempura’d green beans. Simple and memorable, teasing and enticing. And what do we drink with them? Well, we drink Grüner Veltliner here, as well, although not quite as refined as on the other side of 10th... here’s the Elite Liter—Ebner- Ebenauer Grüner Veltliner from the Weinviertel town of Poysdorf. There's a delightful kitchen-garden aspect to the lighter and brighter GVs, wines that tend to favor the citric side rather than the tropical, and this delightful libation from Marion and Manfred most handily measures the mustard, then takes the bean by the string and teaches it to sing.