...so beginning of the month of June up in the air out over the sea to happy landings in Vienna, for the biennial wine festival VieVinum... This onetime seat of the Habsburg monarchy is among the most pleasant & photogenic of European capitals – not built up too high, with a flavour all its own (heavy on the spicy Paprika) – and like the rest of Austria in many ways rather un-German (wine, not beer).

VieVinum itself is always beautifully run, with plenty of magnif wines – almost entirely Austrian,
with a few international exhibitors. There were a couple very engaging presentations offered
on the supporting programme – one devoted to Blaufränkisch from seven countries
(with six different varietal names), but we’ll save that for Part Zwei –

The Austrian Wine Marketing Board always puts on a good show. One fine feature is their Set Tasting in Flights, held in the Palais Niederösterreich on the day before the fair begins. This year, the feature featured Great Sauvignons & Wines of the Pinot Family. Were one to follow the tasting book, the twenty-five Sauvignon Blancs that started the programme would leave even the most practised palate totally dead and incapable of tasting anything else, once the book got to the good stuff... So i began my tasting with flights sixteen, seventeen & eighteen. Having learnt to taste in Chassagne-Montrachet, i started with red:

The grape variety Sankt Laurent. The black sheep of the Pinot family, shall we say. At least, Mommy was a Pinot Noir – they don’t yet know who Daddy was, most likely a sailor... Some very PN-ish elements in the profile, but a wild streak to it and a lactic texture that is all its own. Styles running the gamut from the most sober, stainless-steelish direct to some downright Californian expressions wallowing in new oak...

And more highlights, moving into white – Weissburgunder. This is a variety that has nothing to do with the cheap swill from Alsace that is called Pinot Blanc. To be fair to the Alsaciens, Pinot Auxerrois, like, for example, from JosMeyer, can be very fine. But Weissburgunder – be it from the Wachau, Leithaberg, Traisental or the Südliche Weinstraße in Germany – quite often evokes great white Burgundy without the cooperage.

Rainer Christ, growing wines within the city limits of Vienna, showed his 2015 Weissburgunder Falkenberg, which was one of the finest wines in the entire festival. Very opulent while quite focussed, right spicy on the palate with plenty of length. Not the vivid flair of a GV or a Riesling, but showing its thirteen months on the lees and unfiltered bottling quite handsomely, a fine expression of fossil limestone in the vineyard.

Another highlight, also of the Weissburgunder persuasion, but this time to drink
rather than to taste! That evening was the Vienna Philharmonic with my old running buddy David Schildknecht: Maris Jansons conducting Bartók, and afterward the concert a very traditional Viennese dinner at «Gasthaus zu den Drei Hacken» of Spargel (asparagus), Beuscherl (lungs & other assorted innards) & Nierndl (kidneys) washed down with a bottle of 2009 Weissburgunder «Der Wein vom Stein» from Ludwig Neumayer. Long a favourite, this bottle, under screwcap for nine years, showed marvellously complex secondaries and even a hint at the next stage of evolution, while retaining pristine acidity and accentuating the limestone of the Traisental.

But after the festival days themselves, wine-after-wine, there was only one thing that wd. do: in this case, the genuine article from the neighbouring Czech Republic. Prost! 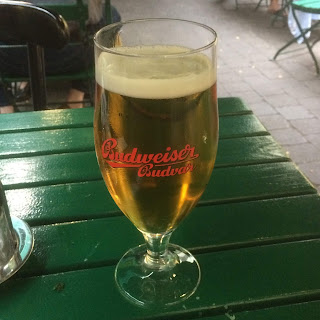