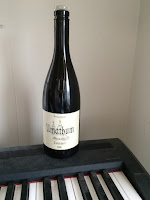 ...apart from the story in the Gospel according to John, which I had hammered into me early in my Presbyterian Period (is that like Devonian or Cretaceous?) my initial encounter with the mythical figure came thanks to Alfred Lord Tennyson, who offered little new beyond adding a little seasoning of rhyme to the parable. My first meeting with a different sort of metaphorical Laz came thanks to an early acquaintance with the angry Anglo-Irishman who remains to this day my favourite poet, William Butler Yeats.

One of his very literary and barely-stageable plays, Yeats’s Calvary presents a different sort of resurrected Lazarus, one who angrily upbraids the Saviour:

For four whole days
I had been dead and I was lying still
In an old comfortable mountain cavern
When you came climbing there with a great crowd
And dragged me to the light.

Lazarus goes on to bellyache even further about not being allowed to remain comfortably and snugly deceased...

But here, a bottle of wine from out of the tomb!

Friday evening found me in the kitchen making a racket with the pots and pans...
Wanting to move away from my traditional salmon sauce of mustard and lime, I kept the ginger and searched the deepest depths of my former sample-cellar for some superannuated bottle to go in the pot. What bottle of which wine – ostensibly way after its time – did I find?

But preparatory to shredding the ginger (gingembre, zenzero, Ingwer) I tasted the wine. Wow! Decided to drink it instead; saved salmon for the morrow, defrosted some sausages, rerouted the baby spinach from salad to skillet and had at it:
– first a simple salad with half an alligator pear and some Kalamata olives.
– Italian sweet sausages (from the local butcher) in cast iron with wilted spinach, one scallion (an expensive scallion, now up to $2 per bunch in the supermarket) and pignole nuts over penne pasta with olive oil and aceto balsamico

I loved Gewurztraminer when I first started with wine, preferably the French version from Alsace without the ü... which I quickly outgrew, abandoning it for Chenin Blanc and Riesling and other varieties with more actual gitupngo. Best ever was a Domaine Weinbach Furstentum Vendanges Tardives 1989 with Kathy Faller at her estate in 2000, exceptional partially because my hostess paired it with a wonderful slice of ripe Münster that had turned to fromage... The Austrian Traminer, whether Gelber or Roter or blended, is typically more delicate than the Alsace version – my historical favourite has been the Roter Traminer from Lackner-Tinacker...

But back to Mister Umathum. This Burgenländer I had thought to have been four-little-paws-up-in-the-air. Was not. Most certainly not.

Medium gold, aromas slightly attenuated, more floral than spicy; a marked patina (the Germans say Firne) to the nose, but nothing oxidised. Very generous fruit on the palate, pears and passion fruit, bit of mango with a coating of caramel, floral still and a good balancing bit of acidity going down the hatch. Lovely finish aromatics (I guess one is supposed to say retronasal nowadays...) floral as could be. The sort of wine one tends to drink by itself before drinking other wines, but a bottle that did very well with the savoury element in the rather hearty and unsubtle dish.

Umathum’s more modest wines can sometimes live long and useful lives. Four years ago as part of VieVinum there was a Sankt Laurent dinner at Restaurant Hansen in Vienna. Where Pepi’s entry level 1991 SL at 20 years of age was one of the stars – even with bottles from Pittnauer, Schloss Gobelsburg and other luminaries on the table...
Posted by james oliver wright at 7:47 AM