that Pest most pestiferous and pestilent... ~ 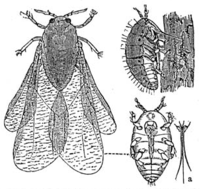 ...it sounds like the stage name of a frowsy screen-starlet appearing in low-budget S&M movies. And oh, what we folks in the world of fine wine wouldn’t give if only that were the case, and this critter—also known as Daktulosphaira vitifoliae—were really a cinema-performer of indifferent talent. Phylloxera is a little beastie of the insect persuasion, a louse—and a lousy one at that. Phylloxera is in the most deadly enemy of the fine-wine grape-vine. In fact, the only food of this worldwide menace is the fine-wine grape-vine, vitis vinifera. This little pestiferous insect, greenish-yellow of hue and silent of cry, nourishes itself by sucking fluid out of the vine. And as it sucks, it injects the plant with its poisonous saliva, which results in formation of small galls on the leaves, along with nodules on the roots. The resultant swelling inhibits growth in the infested sections of rootlet, and the portion eventually dies. This, coupled with secondary damage from fungus and other insects, results in the eventual decay of the plant. The adults are quite tiny, about .04 inch long and half as wide, and thus very difficult to detect. Phylloxera has got a rather complex life-cycle: some lice feed on the roots of vines, while other lice munch in a most licentious fashion on the foliage, providing a one-two punch that is easily capable of putting fine wine production down and out.

They’re quite prolific: each female lays 400 eggs per sitting, often reproducing asexually when there’s no male available. The nymph spends the winter on the vine, awakening with warm weather and commencing to feed. They spread either by being blown around by the wind, or by crawling on their own in search of new fodder once an infested vine dies—on occasion the female lays eggs that produce offspring of both sexes, who do mate. It makes one wonder, if there is indeed anything Intelligent about the Design of things, why Nature would provide such a destructive pest with so many means of propagation and survival...

What can be done to combat the spread of phylloxera? Sandy and wet soils offer vitis vinifera a certain degree of protection from the pest, but humidity presents good grape growing with other challenges. One solution is found in the vine-nursery. Even though our American vines vitis riparia and vitis berlandiera do not produce distinguished or even satisfying wines, they possess a native resistance to the depredations of the plant louse. The trick was developed some hundred and few years ago of grafting buds from vitis vinifera vines onto rootstocks of these aforementioned hardy midwesterners.

And no matter what one’s opinion of the French as a nation might be, one surely knows that they’ve had their gallic pride sorely wounded twice in the twentieth century, when it required armed intervention on the part of the United States to save their butts from the Germans. But an even crueler joke on them guys over there is the fact that nearly all of their celebrated grape-vines in Bordeaux, Burgundy and Champagne are in fact grafted on to vine-roots whose roots (as it were) are in Ohio.

It has become by now a moot point whether the pre-phylloxera wines of Bordeaux (by which we mean those from the 1860s and earlier) were greater and more profound than those made afterward, but once upon a time there was lively debate about whether or not Bordeaux had ever entirely recovered its former glory.

In the 1860s the insect was indentified who had just begun laying waste to the vines of Bordeaux and the Rhône. It had arrived on vines brought from the eastern United States for experimental purposes. From there, it spread out indiscriminately over the European continent, munching on every vinifera rootstock it could grasp with its greedy little mandibles along the way. By the end of the nineteenth century, it had destroyed two out of every three vineyards in Europe. And for an encore, it marched westward across the Rocky Mountains, and devastated the nascent Californian viticulture in the 1880s.

Imagine the level of panic. Some positive developments resulted, like when Bordeaux’s wine-expertise moved south to Rioja in search of resistant vineyards and created a Spanish still-wine industry, the fruits of whose labor we this day savor... But the European wine industry took up until the nineteen-twenties to come close to catching up.

And more recently in the closing years of the 20th Century, the curse came home to roost once more, when it began tearing a new path through the vines of California. Rootstocks which were developed in the 1960s and 70s to combat other problems turned out to be less resistant to the bug, and have recently been replaced at colossal expense—another factor which has contributed to price increases for the fine wines of Napa and Sonoma.

Posted by james oliver wright at 10:37 AM