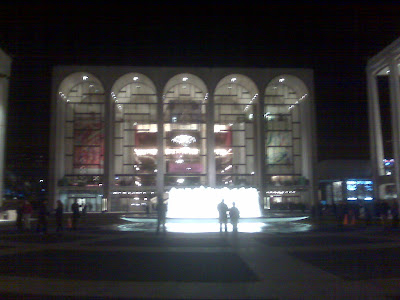 How is it I’ve been going to the opera since 1972—and eagerly attending Jenufa, Katja Kabanova, Füchslein and Makropolous at every opportunity since ’76—and only day before yesterday stumble into the House of the Dead?

and is there another composer who sounds quite like Janáček? Is he like a hard night in a halfway house on the road to ruin from Moussourgsky to Bartok, perhaps? His music lacks neither root nor branch, but remains unique and satisfying. Even that old warhorse Sinfonietta sounds forever fresh, and his Glagolitic Mass is a sinful feast for the ears—although I couldn’t bring myself to hear it done with electric organ at beloved Carnegie Hall when it was recently performed there…

Introverted barbarity and extraverted barbarity—they find their way to unholy union in Janáček’s operatic setting of Dostoyevsky’s novel From the House of the Dead. This is quite a remarkable work, convincingly demonstrating among other things that the Romantic idiom had not been totally exhausted by Gustav Mahler and Richard Strauss, and still had some wind left in the late 1920s. The introverted Dostoyevsky and the extraverted composer leave nearly no variety of anguish in the garderobe as they command the stage for some ninety minutes with a work where very little action takes place—apart from a couple very appealing pantomimes, beautifully rendered in this production.

Like most any opera that wasn’t written by DaPonte and Mozart, dramatic motion is a problem in LJ’s works. Whatever the faults of Patrice Chéreau’s centennial production of Wagner’s Ring cycle—and they were legion, although that production was much more effective as a television show than it was as live theatre in the cramped and moody Haus up on the hill in Bayreuth; only the magical hand of Maestro Boulez saved him from utter embarrassment at the time—he does an excellent job with this opera. His vision of prison life is very animated and expressive, didn’t leave out the buggery or the tenderness. Took a dramatic opportunity to drop a ton of rubbish onto the stage to punctuate the first act, then put the players to work picking it all up to begin the second. I’ve noticed this trend for the past ten years in European opera houses, directors putting some sort of motion on stage in order for it to seem like something is actually happening in an opera—notably street-theater jongleurs and acrobats in Die Tote Stadt at the Deutsche Oper in Berlin, and a Daniel Barenboim reading of Die Meistersinger with rollerblades at Staatsoper Unter den Linden.
Wonderful job by Essa-Pekka Salonen, managing myriad conflicting bursts of momentum, allowing the ecstatic orgiastic orchestral couplings to erupt in wave upon wave without ever badgering the singers. William White tragic and stentorian as Gorianchikov, while Peter Mattei held attention quite well as Shishkov—all in all an excellent vocal crew, the one female voice a bit of a shock...

Almost frenetic and kaleidoscopic juxtaposition of instrumental figuration, wholetone and bitonal moments contrasted against ineluctible modality, sonorities falling out of a yawning gap between twittering flutes and a sustained note on the contrabassoon... Agitated broken rhythms, patterns and reiteration—lots of noise out of the kitchen—chains and hammers; layered instruments combined in choirs commenting one upon the other... and then there was the choral writing, haunting and menacing. Instrumental melodies grounded in oblique unanticipated intervals, and LJ’s characterismic vocal melodies closer to the Moravian speech. The connexion between language and melody was a special theme for Janáček, and I felt scandalised back in March when the Staatsoper in Vienna felt obliged to sing Jenufa in Max Brod’s contemporaneous German translation, instead of the original Czech.

The Metropolitan Opera orchestra has to be one of the very best. Here, there, anywhere—in the pit or on stage. In the past year I’ve heard them play under Levine, Ozawa, Barenboim and now Salonen— although I would rather hear Levine conducting Boston in a concert hall, it’s truly remarkable how they can play so convincingly well being led in so many different directions. In fact I believe Pierre Boulez gets his paws on them later this season at Carnegie Hall, and that is sure to be a treat.
I am beginning to have a better opinion in general of the Met than the one I have held for the last decade or so. And I shall try to see this again before it closes.
Posted by james oliver wright at 6:00 PM