~ gained in the translation? 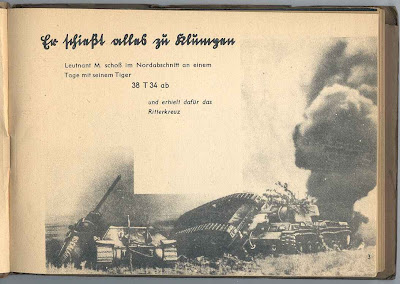 I just reread Erich Maria Remarque’s great novel ‘Im Westen nichts Neues’
the vigilant observer will catch the anachronistic and east-for-west image, but, you get the idea...
couple of thoughts—I can never read it without being moved—
but I consider how many individuals hate this book because they were made to read it in school.
another thought is, though the title translates as ‘in the west, nothing new’—
I find the English paraphrase ‘All Quiet on the Western Front’ to be much more evocative.
the very best example of ‘gained in the translation’ has to be Marc Blitzstein’s rewriting of Bertolt Brecht’s ‘Die Moritat von Mackie Messer’ into the American hit ‘Mack the Knife’...
among classics of WW1 literature, Remarque’s novel is first fiddle of the quartet that includes Ernest Hemmingway’s ‘A Farewell to Arms,’ e.e. cummings’s ‘The Enormous Room,’ and John Dos Passos’s ‘Three Soldiers.’
the imagery and content guaranteed this work its pride of place among the very first books that the Nazis burned when they took power in 1933.
and along with this reading comes the occasional cynical thought—what do you do, if your first novel is one of the monuments of Western literature, and then you’ve got to live forty years longer...? certainly EMR produced a couple other fine novels, and many decent ones during the composition of which it must have become clear to him that he was neither Thomas Mann nor Herman Hesse, but this début was rather an impossible act to follow ~
Posted by james oliver wright at 8:12 AM

i wonder whether you could decipher what is written in "suetterlin" in your pic? it reads "he shot everything into lumps" and i admit i am a bit puzzled if not shocked: great headline for all wars, for all atrocities. followed by: "one day in the northern section, lieutenant m. shot a 38t34 and was thereupon awarded the knight's cross."

remarque's book is one thing, the other thing is the gilding of certain memories. i truly wonder what you would say if certain germans were to advertise vietnam in such a way?

the pic comes from Generaloberst Heinz Guderian's operator's manual for the Porsche Tiger heavy tank,
a different war and the other front, but I chose it because was near to hand and it looked sufficiently violent.

and yes I could read the caption, which I would translate, "it shoots everything to smithereens", and that on a single day in the northern sector the lieutenant picked off 38 T34 tanks, und so weiter.

in the first World War, the governments of Europe were seized by a general stupidity. In Vietnam, the stupidity was ours alone, especially noting what had just happened to the French