~ a fun footnote to former foolishness... 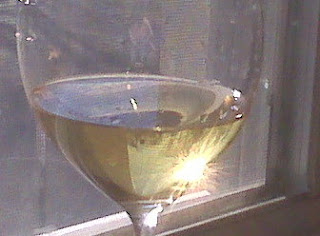 ...so spent a couple weeks in Europe last month, most of it in Austria traveling around the wine counties, seeing people I work with as well as friends from previous incarnations.
one very pleasant meeting from among the latter was a carefully timed luncheon with Paul Achs—who had a small window between flying in from London and flying out to Düsseldorf to collect me at the Hauptbahnhof in his hometown of Gols and drive ten minutes through the vineyards to Podersdorf, where we spent and hour and a half together having lunch at restaurant zur Dankbarkeit, talking about nearly everything but business before I got dropped off again at ÖBB.

In addition to being a winegrower himself, proprietor Josef Lentsch has quite a cellarful of the Burgenland’s best bottles belowdecks: ‘a wide range, from Achs to Velich,’ as he puts it. And what did the sommelier haul out of the Schatzkammer for us on this occasion? It was a 1994 Pannobile white from Paul Achs, which was then made from a cuvée of Weißburgunder and Chardonnay—with I think I correctly remember 20% Welschriesling—

this to wash down a delicious Neusiedlerseezander—a local walleye that had himself just gotten hauled out of the neighbouring lake. Paul opted for the Wels, a catfish summoned from the same depth (that’s a joke—the Neusiedlersee is very very shallow) and put before the chef. I’d had the Wels on my previous visit to Dankbarkeit—a delicious fish indeed, with a slightly firmer flesh than the flaky fellow on my platter.
another joke is that since I come from Virginia, I can just translate my West Virginia jokes into German, and they automatically become Burgenland jokes...

the 94er Pannobile white showed nice and nutty aromas, something like those pinot blancs one sometimes finds in Burgundy, which age quite durably and show a sort of creamy flavour and pleasing texture, delicious and satisfying without ever quite aspiring to greatness...

and the punchline of this here excercise? I mentioned to Paul that I’d just had lunch at Chanterelle in New York with Bob Millman. I had first heard of Paul Achs when Chanterelle sommelier Roger Dagorn warbled his name into my ear some six years ago, and lost no time in getting his wines into the market and onto the winelist. I was able to connect once when Paul visited NYC and together go to Chanterelle for lunch, along with Bob, plus on that occasion Jodi Stern.

but no sooner had I uttered the name ‘Chanterelle’ than Achs responded, ‘aah... seafood sausage...’
* see below posted 17 March
Posted by james oliver wright at 3:56 PM

Nice pages!
we like your blogging style and we want to advertise your blog.
If you want us to link your blog in our site,
write in a mail :

1. your site/blog address;
2. a representative image of your blog;
3. a detailed description of your site.

we would be honored to advertise your blog on our blog!
anyway my friend, keep on with your great work!