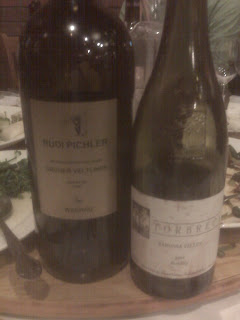 ...six merry fellows well-met by mag-light by moonlight: Mike Robertson, Ben Bohen and instigator Seth Datz—the latter of these along with fellow attendee Aaron Sing Fox being a veteran of Sergeant James’s German Army—plus the out-going (reasonably outgoing but still reserved) beverage director from Restaurant Wallsé, Eric Larkee, and myself.

High Table was convened at half-eight on a Thirstday, first Thursday in the mostly miserable month of March, which had no-question-about-it come roaring in...
Scene of the deed was Grand Sichuan St Mark’s Place—these restaurants are very wine-industry-friendly, and we are welcome with bottles.
This evening provided me with a good reason to raid my dwindling cellar, and put an appropriate end to a couple wines that had been aching to get out of the basement for some time now.

one of the most pleasing aspects of the dinner for me was the discovery that although the food could be quite fiery, never did it lack for delicacy, nor treat a wine harshly just because it could.
~
first-up was a bottle of fizz that Seth brought, the Chartogne-Taillet Brut Rosé. Going around six ways, it was empty before any food was down, so didn’t have the chance to display what I consider to be rosé Champagne's remarkable affinity for duck—be it either of the Pekingese or Tea-smoke persuasion. this bottle showed a lovely balance of flowers and spice, very strawberry and directly fruitish, satisfyingly long and elegant—truly delightful.
~
second came a magnum of 2005 Rudi Pichler Wösendorfer Hochrain Grüner Veltliner Smaragd. This bottle had been a hand-carried present from Mr Pichler couple of years ago—my first encounter with the wine had been in Rudi’s new tasting room where he made me and Peter Liem and David Schildknecht try it out of what seemed five different types of glass—and I had thought it to be one of the best GVs of that year.

here Herr Hochrain got fed first some soup-dumplings, then fresh & crunchy peashoots and a blazingly spicy whole fish in bean sauce. The less said about the salt and pepper shrimp which arrived between wearing neither salt nor pepper, the better—ah well...
with this it must be dutifully reported that Seth Datz did a terrific job of managing the menu throughout the bacchanal, never once losing perspective, continually ensuring that the dishes which arrived on the table related well to the previous platters, as well as to the wines.
Hochrain Smaragd presented a very compelling balancing-act between assertive and transparent—an extrarordinarily weightless sense of equilibrium in a rather substantial package. This GV unloaded the best out of the orchard upon nose and palate—plums playing with peaches from the furthermost reaches of scent and of savour to favour the flavour—and a mineral persistence which left a length based not upon weight. Some of its concentration and poise could presumably be put down to the fact that yields in this vineyard were likely reduced owing to Pichler’s predisposition to avoid working with botrytis berries. Most excellent and very well matched to the provender.
~
third was my second GV, which faced an impossible task: following the Wachauer Smaragd from Rudi Pichler.
my years in the music business taught me two Important Things: never play on the bill after a band that’s got two drummers, and, never sit down at the piano after Oscar Peterson.
2007 Moric Grüner Veltliner Sankt Georgen had spent sixty minutes in a decanter by the time we got to it—lovely medium gold colour. Somebody thought it was dessert from the look of it, but no... This Burgenländer was ultimately judged by all to be quite succesful in itself, a relatively subtle excursion into an idiom where little subtlety rules: GV in oak. Well proportioned, quite creamy and understatedly burgundian in a limestony way, with the wood well on its way to becoming integrated. I’d finished a bottle on the second day with some rather spicy steak tartar at Trestle a couple months before and thought that a better match. Perhaps I am too sparing in my praise because I sell this one, but I was struck by the fact that not even the really mygoodness hot whole fish could knock a hole in it.

~ and then we were on to the reds ~
Aaron brought a burgundy, 2004 Dupont-Tisserandot Gevrey-Chambertin. I offered comic relief guessing where it had come from, mentioning every different estate in order in the portfolio that Aaron sells, but I started in the Côte Chalonnaise headed north, and gave myself up for a fool long before I got this far up the Soixante-Quatorze...

With the tea-smoked duck, this may have been the best food match of the evening, although the Wachauer also proved adept in a couple combinations. Didier Chevillon has a lot of AC Gevrey planted, and has been known to invoke the attentions of the cooper in order to hook into the American market and its pinot profile, but in this vintage of lesser material, he exhibited good sense and restraint, and bottled a very excellent and elegant wine. Chinese broccoli with shredded duck was a faintly remembered afterthought...
~
Seth’s second bottle was the 05 Châteaunuf-du-Pape from Domaine Marcoux. With this we made the clubhouse-turn from fish through fowl play into flesh. A fleshy wine, quite expressive. Gorgeous mouthfull of ripe and beautifully coherent grenache, soft and ripe tannins with a lingering spice.

Speaking of lingering spice, at this point we started in on the cumin beef, which was excellent, and a couple pork platters, one of them featuring flashingly bright sichuan peppercorns.
~
—and by this point, it’s a bit of a task remembering
which plate arrived in which order,
but I seem to recall that we were pleased...
~

next red wine arrived to table in the august form of  04 Torbreck Run Rig. I am more of a Factor/Struie fan myself, but their big brother lived up to its reputation. Dan Fredman had given me this bottle left over from a VOS tasting back a couple of years ago... No hulking monolith, but rather an exquisitely concentrated mouthful of shiraz—whatever amount of new oak had been deftly folded into the fruit, miles long and appropriately persistent. Didn’t get knocked off its perch by the peppercorns, which pleased me to no end. Dave Powell is a great winemaker. Even if he did show up once to pour at Zachy’s wearing flipflops and shorts...
~
last red wine was a 2004 Mara Zinfandel from Napa. I am such a passionate partisan of Sonoma Zin that I consider myself too prejudiced to comment appropriately—there was a late-arriving braised beef with chili sauce hit the table, which it did nicely with, but beyond that I shall leave it to the other chaps to comment, once they read this here literary masturpiece...
~
and the very last wine was a bottle I should’ve drunk five years ago, but I never had the right number of suitable miscreants gathered together in the right place before now... 1991 Philippi Spätburgunder Rosé Eiswein, 500ml. This from the Kallstadter master of Koehler-Ruprecht in the Pfalz, it fermented for a year on its own yeast in a second-hand Château d’Yquem barrel. As a young wine it offered the impression of strawberries floating in a bucketful of Bâtard-Montrachet. Now the berries have evolved to orange-rind, and the wine remains vivid and arresting, if not so generous as before.
~ a well-wasted evening and a great feed ~
General consensus held that Hochrain Grüner Veltliner Smaragd magnum was the best in show. I loved the Chartogne-Taillet, and liked the Marcoux very well. Run Rig performed exactly as advertised, made it abundantly clear what all the fuss was about...
~
I reported the evening’s proceedings via smoke signal to Pichler, whose characteristically dry wit led him to respond: “happy to hear about the Hochrain and ‘Best in Show,’ but I must carefully explain this metaphorical use of the term to my Labrador retriever Pinot Noir, so that he doesn’t lap up all of my Hochrain in order to eliminate the competition.”

Posted by james oliver wright at 11:16 AM