learning to love the Wein/4 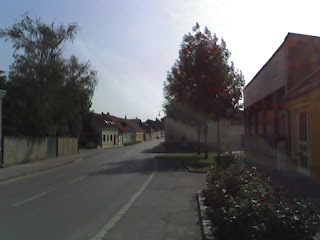 Wein/4 is the way that the Cleverers in Austrian publshing write “Weinviertel”. Wein is wine, and Viertel is a quarter, so it's only poetic that a quarter of the wine in Austria comes from this neck of the woods. (Slow down, boy, the neck of the woods is actually the Wald/4, which is adjacent to the Wein/4...)
Being on more than one occasion impressed with the Hofer Litre Grüner Veltliner, I asked Mr Theise if in fact he had found all the good GV in the Wein/4 that was waiting there to be found, and Terry replied, of course not...
So after spending a couple half hours on the Wein/4 when I was at Prowein in Düsseldorf back in March, I went to spend a couple half days in the Wein/4 itself when I was in Austria last week. Where I rode the Skoda up to Retz and over past Falkenstein to Poysdorf, and enjoyed lovely scenery all the way ‘round.
Stopped for lunch in Retz, and was fed a truly delicious cream of garlic soup at the Schloss Gasthof, accompanied by a GV that nearly took the tarpaper off the roof of my mouth. It was like one of those GVs that you used to get in the cheap taverns in Grinzing back in the 20th century... It wasn’t until after I returned to the US that I remember what Hofmannsthal had written in his libretto to Richard Strauss’s great opera Der Rosenkavalier: “sharf und herb wie ein Retzer Wein”. This one was most certainly tangy and tart, just like Baron Ochs auf Lerchenau advertises... The very lovely and flavourful Rehbraten which followed along with its attendant Preiselbeeren and Knödel—which reminded me of favourite meals in Bavaria—deserved a really good glass of Zweigelt, which it got.
Spent the night at the Black Horse Hotel in Poysdorf, where I had a lovely walk around the place, and happened around dinnertime into a Heuriger called the Veltlinerhof. And found there really lovely GV, both the WeinviertelDAC version, and an old-vine cuvée with a little more residual sugar. Typical pub-grub in this tavern, but there followed a delicious glass of Blauburger. Which is not Blauburgunder, but yet another of those unique Austrian varieties which Doktor Zweigelt midwifed into the world, just a bare year after he crafted that variety for which we praise his name...
Inhaber/Winzer Wolfgang Rieder turned out to be a truly delightful individual, and spent nearly two hours with me the next morning, showing me around the neighbourhood, all the way up to the Czech border—the way of the vineyards and the lay of the land.
next day in Vienna at the fair, I ran into many American acquaintances, including Erin Grace and Seth Allen... mentioned to S that I had just been to the Wein/4, and he wished to know why I was determined to punish myself... Erin was prodding him to at least taste the wines from this region being shown at the fair, him reluctant. says I: “Well, think of it like Communist China. If Nixon could go to Peking in 1972, you can go to the Wein/4. It’s like RMN acknowledging that a quarter of the people in the world existed. Your visit alone would confirm the reality that a quarter of the vineyard-land in Austria actually produces wine. ” Mr Allen’s studied comment involved a caricature of that embarrassed president, which I shall leave to the reader's imagination.
Posted by james oliver wright at 5:07 PM